TEAM USA Remains Victorious on the Second Day Of Competition 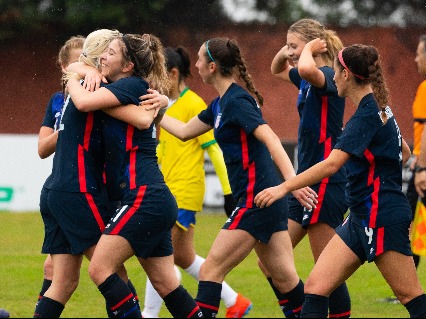 CAXIAS DO SUL, BRAZIL — As the second full day of the Deaflympics got underway, the United States Deaf Women’s National Soccer team opened pool play against the host country, Brazil, with a resounding 4-0 win.

This marked the first time in country history that Brazil sent a women’s team to compete in the Deaflympics. The rain didn't dampen their spirits, as they showed they could compete on the world stage, battling the United States to a 0-1 halftime score. As the game went into stoppage time right before the half, veteran Emily Cressy scored the first goal for the United States.

The United States turned on the heat in the second half, with goals by Mia White, Nicole Nunes and Sophia Post. With their first game and their nerves behind them, the team now sports a 1-0 record in pool play, and shifts their focus to the next game on May 7th vs Japan.

As heavy rain and fog descended on Caxias do Sul, the United States Deaf Swim team dove into the pool for their second full day of competition, and swam away with four medals on the night.

Team USA swimmers Matthew Klotz and Collin Davis won Deaflympic Silver and Bronze in the men’s 200m backstroke, displaying their full athleticism and strength. Klotz followed up in the next event, and added to his medal haul with a bronze in the men’s 50m breaststroke.

In the other race of the night, Brooke Thompson and Kaitlyn Weatherby finished fourth and fifth in the 100m women’s butterfly.